Surly that title has to be clickbait right? I mean, You need to have 1000's of images of your B data all different angles and facial movements for the model to be able to learn how to smoothly move a face, right? Well. Judge for yourself. Here are the 4 images I used,
. .
And here is a direct comparison between the original video vs the swapped version.
This video is not in HD because I couldn't be bothered lol

.
.
Pretty decent right? I mean, it's not going to fool anyone, but for just 4 source pics, its pretty good right?
Confession time. Techincally...... that title is a little bit clickbait, because although I started with only 4 images for my B dataset, I created more images/data from those 4 photos I started with. In fact I made 1000's of images from those original 4 photos. By using a Face-Picture-to-3D-Controllable-Model application (I don't know what to call this, lets just call it FPT3CM app from now on). Basically the way it works is I was able to to plaster all 4 of these faces onto a 3D Human skull template, which I could control the rough 3D shape of, like they were a texture file on a 3D model in a video game. If your curious what this looked like, these are the videos I made from the 4 photos, which I used my B-data.
.
.
.

.
.
Why these face-pictures-turned-into-3D-modeled-videos are bad.
As you watch that quad video of Brad Pitt's face moving around, I'm sure you noticed where it goes bad. The very first mistake you probably noticed is that it does not have real mouth. Just a generic set of teeth and tongue.(generic teeth may sound ok, but you'd be shocked how much of an identifying feature someone's teeth are) And even then, it can sometimes suck at properly "marking" the "mouth edges" of the lips. This gives the end result on the final swap of a secret mouth coming out of the normal mouth. Another thing that's crappy is the FPT3CM model can move the eyes of the jpeg texture plastered on top of it, but It really struggles to do so. In the final conversion, you probably noticed how the eyes were completely moving around like they were normal but they seemed to be strangely glazed, locked-looking in one direction.
Another reason why the FPT3CM data is crappy is because the face sometimes doesn't feel.......organic? I chalk this up to the the FPT3CM app itself. This program can't create size=85[/size] new data, it can only manipulate existing data around to appear like new data. So even though in the moving jpeg video, you see Brad Pitt's head lean up and you see slightly up his nose, that's technically not what Brad Pitt actually looks like with his head at that angle. It's Just a stretched image trying to recreate what it looks like to look up Brad Pitt's nose.
When it comes to what I could make the faces do, I could control the FPT3CM 3d model to a small degree, I would say about 30 degrees in any direction, but it gets worse and less realistic the closer to the 30 degrees you manipulate the face. In fact, you'll notice that in the final conversion, when Jim looks all the way to his side, it gets really crappy looking. A "straight-facing" face like the 4 images I started with turning 30 degrees will not create a face looking 90 degrees to the left or the right. The math doesn't add up. As a result, I did not feed the model a single frame of data of how Brad Pitt's face looks from the side. These are some of the reasons why doing this method will not produce a ultra realistic swap.
However....... This was a worse case scenario, where I literally only had 4 images to work with. In a scenario in which I had 50 or even 100 images to turn into slightly moving 3d videos, I could really simulate almost every angle and facial reaction in a believable manner. Also Instead of doing a swap with only these artificial photos, It could be used to supplement missing data, imagine a data set made up of completely organic photos, say a photoshoot, with pics taken at all different angles. But the photographer forgot to take any pictures of the guy angry, closing there eyes, or looking up. This could be used to help bridge the gap on that missing data, and would look great.
.
.
.
My thoughts on using villain.
Villain doesn't make any sense. Sometimes it will run at a high batch size, and sometimes it will struggle, and memory-crash on a small batch size in the same project with the same data set. In this project, I really couldn't get a batch size of 6 to work after the first 15 hours. It would always memory crash despite working previously. Then around 35 hours, a batch size of 4 stopped working, forcing me to go down to 3. Then out of nowhere, 50 hours in, suddenly batch size 6 is viable again. I swear I had no memory hogging apps open when it stopped running batch size of 4, but even more confusingly, now it has no issue running 6 even with chrome open. So yeah villain is super finnicky and unpredictable. Other things I noticed: When comparing the various stages of training on villain to the dfl-h128 YouTube swap I posted previously, they were noticeably different. Both are unfinished and therefore blurry, but dfl-h128 face always looked like it had varying levels of gaussian blur on it, while villain always looked like it had varying levels of "smart" blur on it (it's a blur filter in photoshop). I don't have any actual photos or videos to show you what I mean, So I made a simulated photo in photoshop to explain what I mean. Also I go into more detail in the "what I learned" paragraph below about villain vs dfl-h128, -which is better? but one thing I'm unsure about is if villain is worth it in the long run. Right now, I'm running another villain project that I may or may not share, where I'm trying to see realistically how much realism/training I can truly squeeze out of villain. I'm willing to give it 500 hours. I think I have proved to myself that villain is a viable alternative for short sub-100 hour swap, but I'm curious if villain can pull off hyper realism.
.

.
.
.
.
.
.
.
Training Progress
Here are the results at 7 different stages of training. Make sure you turn HD video on again.

Here's a gif of the training progress at 9 different stages. Something interesting I realized after making these gifs: These 2 gifs are not the same frame. Not even close, they are 10 seconds apart. I think they look so similar in Brad Pitt's reaction because of the "uniformity" of my b side, essentially coming from only 4 source images. This seems logical and obvious, however it's more convincing and "seducing" when watched in video form versus 2 random frames side by side. The nine stages are hours: original, 1.5, 13, 21, 25, 33, 38, 56, 68
.

.
.
Here's an overall graph of the training progress 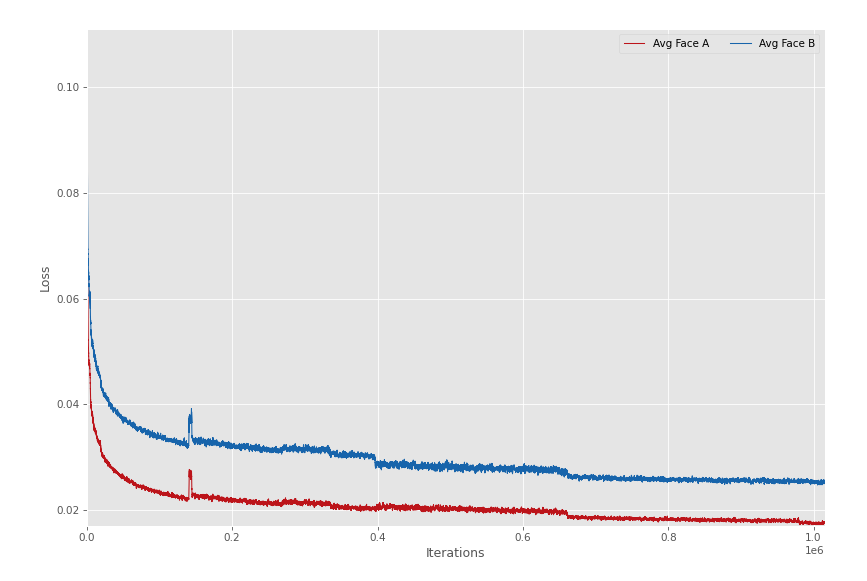 Idk, here's the same graph but zoomed in at the end 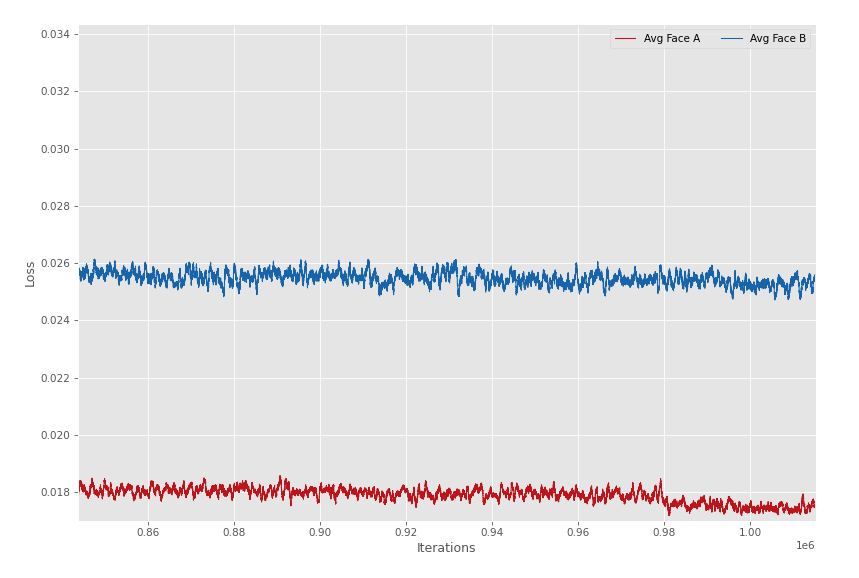 .
.
What I've realized doing this project:

LOSS
Batch Size: Mostly 6, 4, and 3
Loss function: SSIM
Mask Loss Function: Mae
Penalized Mask Loss
Eye and Mouth Multipliers: Left on default until the end, in which it was increased.

Every thing else not mentioned was left on default

EXTRACTION
Extraction was s3fd detector, fan aligner, Hist normalization. not sure what else I can say.
.
.
Acknowledgments:

.
.
.
If any of this was helpful, leave a thanks! My next project will probably explore just how much quality I can get out of villain.

Mate. Were it not for Batman, you'd be my Hero right now. This info is exactly what I was looking for. Thanks for sharing.

No way!? This wacky idea was the perfect info for you? lol If you don't mind me asking, which part?

Did you try the same thing with the "first order" AI?
would be interesting

This was my attempt at only 8 pictures.

I dunno what I'm doing

Honestly now that I think about it, the app I used is extremely similar to first order AI, only I could make on the fly adjustments to 3d skeleton of the face, say if I ever felt the nose was too big or small or the eyebrows werent moving right. Check your DM's

Thanx for the detailed sharing!

I was wondering how and if, using faceswap kind of like forst order motion could be possible. Here is my answear.

It surely has some usefull cases, and can get the realisme way further that first order motion. Wich has no control over it (what a pitty).

I think it would of been very interresting with one attempt with Brat's profile.

I tried this technique with blender and liked the results as well.

I know that this is not a forum for blender (nor for the add-on package required to run the face model) but the two programs compliment each other and if you know how to use one it makes learning the other easier.

With the right add-on packages blender supports the uploading of data in the form of a csv. file from an app called Link Face. This allows your blender model to mimic expressions captured on video instead of having to create expressions using a keyboard (not very human like). The catch is that you need a specific type of camera to use this app.

I have searched and can not find anywhere to download these Link Face csv files to import into blender to animate my model. There have to be people sharing their content. I would think there was a forum for this app, but I can't find one. Maybe its the combination of blender, the add-on package, and Link Face that is making it difficult to locate as no one forum seems to put it all together.